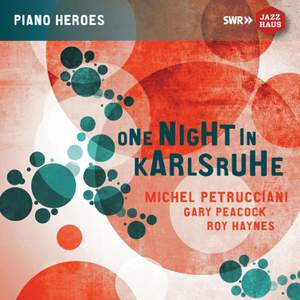 One Night in Karlsruhe

Across a programme of swinging evergreen standards and ear-popping hard bop originals, Petrucciani’s playing is joyfully mesmerising. His fleet take on ‘There Will Never Be Another You’ delivers... — BBC Music Magazine, February 2019, 5 out of 5 stars More…

Warren, H: There Will Never Be Another You (Live)

There Will Never Be Another You (From "Iceland") [Live]

In a Sentimental Mood (Live)

Michel Petrucciani: One For Us

One for Us (Live)

Embraceable You (From "Girl Crazy") [Live]

Michel Petrucciani: She Did It Again

She Did It Again (Live)

My Funny Valentine (From "Babes in Arms") [Live]

With his predilection for the piano trio as a central form of expression, Michel Petrucciani was out of step with the mid-eighties.

He was a driven man, playing in his most active period more than one hundred concerts a year, with the feeling deep inside him that, given his illness, he had less time available than other people, a feeling which he repeatedly mentioned in talks with friends and journalists. Petrucciani wanted to condense his music, releasing energy under tension in an awaited discharge. The bassist Gary Peacock and the drummer Roy Haynes were the perfect partners. One had been socialized in post bop, sowed his wild oats in Free-Time and later, as a partner of Bill Evans, Paul Bley and Keith Jarrett among others, perfected his trio playing. The other had personally experienced the birth of bebop and was one of the busiest jazz luminaries in his field.'

Across a programme of swinging evergreen standards and ear-popping hard bop originals, Petrucciani’s playing is joyfully mesmerising. His fleet take on ‘There Will Never Be Another You’ delivers flurries of notes that build to a blizzard…Petrucciani knew his time was limited, and that perhaps explains the intensity of performances like this.

Given that Petrucciani’s technical ability was so complete, it’s remarkable how melodic was his improv, often at high speed, and how his soaring invention uplifts both his audience and his accompanists.