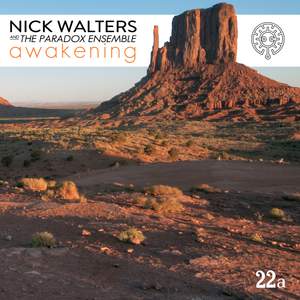 22a023 sees trumpeter, friend and long-time label affiliate Nick Walters bring his Paradox Ensemble back to life with the mini-album ‘Awakening’. The thirteen piece ensemble combine spiritual and eastern jazz moods with West African rhythms across four extended tracks. Limited one-off pressing, manufactured at Optimal, Germany. Channelling the spirit of Woody Shaw, Charles Mingus and absent friends the band features some familiar faces such as Ed Cawthorne (aka Tenderlonious) on tenor sax and flute, Aidan Shepherd (Ruby Rushton) on accordion and synth, and of course the incomparable Nick Walters (Ruby Rushton & Riot Jazz) on trumpet and synths. Tracks include “34268”, inspired by an Agbadja rhythm from Togo, features two ways of emphasising the same rhythmic motif - the first half a slower pulse of three beats to the bar before quickening to a four to the floor groove for the second half, accompanied by a classic trumpet solo from Walters. ”Dear Old Thing” is a tribute to beloved cricket commentator Henry Blofeld. The musical inspiration is channelled from Eric Dolphy via an exquisite flute solo from Ed Cawthorne (Tenderlonious) and another transcendent solo from Walters. Nick Walters is arguably one of the most underrated musicians in the UK jazz scene. This project on 22a, which is entirely composed and arranged by him and featuring a roster of unbelievably talented musicians, will hopefully change this. He has dedicated this record to the memory of Oli Coles and Becky Dykes.