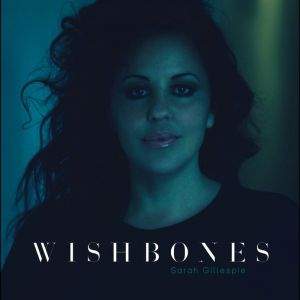 The Ballad Of Standing Rock

The Last Of The Goodtime Charlies

The Theft Of Marco Munoz

Brand new album by Sarah Gillespie,the critically acclaimed Anglo-American singer songwriter is back with her fourth album in less than a decade.

Produced by Mercury nominated jazz composer Kit Downes, the same unique mix of savvy, sensitivity and wry humour runs through Wishbones as it did on Stalking Juliet (2009), In The Current Climate (2011) and Glory Days (2013). She is backed by a supergroup of the UK’s finest jazz players firing on all cylinders across 10 new songs that feel as much like a short story collection as an album. Surreal, magic-realist lyrics tell succinct tales of exile, nationalism, motherhood and belonging. The jaunty Costello-esque ‘The Last of the Goodtime Charlies’ centres on a blinkered Brexiter living on rose-tinted memories of his homeland. It’s easy to dismiss such narrow-minded patriots as Goodtime Charlie, but in the final song on the album, Gillespie juxtaposes his anachronistic absurdity with the kind of tragedy that occurs when such views become government policy: ‘The Theft of Marco Munoz’ was inspired by the story of a Honduran man who committed suicide after being separated from his family at the US border. The Ballad of Standing Rock slips into a the dreamscape of a construction enjoiner on the infamous North Dakota pipeline while the raucous New Orleans style party of Coup D’etat showcases Gillespie’s trademark wit and infectious melodic hooks.