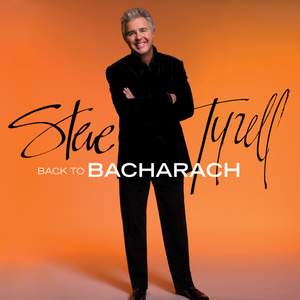 Steve Tyrell: Back To Bacharach

That's What Friends Are For

The Look of Love

This Guy's in Love with You (feat. Herb Alpert & Burt Bacharach)

One Less Bell to Answer

Reach Out for Me

I Say a Little Prayer for You (Duet with Patti Austin)

I Just Don't Know What to Do with Myself (feat. Burt Bacharach)

Always Something There to Remind Me

Don't Make Me Over (Duet with Patti Austin)

A House Is Not a Home

Raindrops Keep Falling on My Head

Make It Easy on Yourself

Anyone Who Had a Heart

Having achieved great success over the course of four decades as a songwriter, producer, and performer, Steve Tyrell is the man behind suh pop hits like the chart-topping ‘How Do You Talk To An Angel’ and producer of Linda Rondstadt’s Grammy-winning Don’t Know. He was only 19 years old when he first began producing with music greats Burt Bacharach and Hal David. He worked on several Dionne Warwick hits such as ‘The Look of Love’, and ‘Alfie’. Together with B.J. Thomas, they made the Bacharach-David song, ‘Raindrops Keep Falling On My Head’ into a 1969 Oscar winner for Best Song From A Movie (Butch Cassidy and the Sundance Kid). He has lent his musical expertise to over 40 films and countless television projects.

Originally released in 2008, this year marks the 10th anniversary of Back To Bacharach, as well as Burt Bacharach’s 90th birthday. This anniversary edition includes seven bonus tracks.

Steve Tyrell says… “I have been asked many times ‘where did you go to college?’ and I always answer with the same response: ‘I’m a graduate of Bacharach University!’’’ To celebrate the tenth anniversary of this album, Steve went back into the vault and polished seven lost gems recorded during the Bacharach sessions. Among them, his version of “That’s What Friends Are For”, a song he has long regretted not including on the original album. His tribute to the songs of Burt Bacharach and Hal David now extends to additional collaborations with Carole Bayer-Sager, Mack David, and Bob Hilliard. By his own admission, this is one of Tyrell’s most personal albums with songs that have shaped him as much as they have shaped modern American Songbook