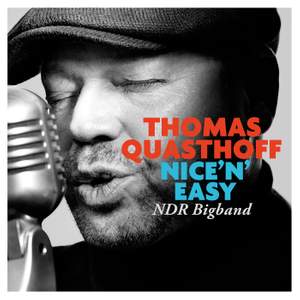 Hamilton, Arthur: Cry Me A River

Arlen: I've got the World on a String

One of the most admired Lieder and concert singers of his generation, Bass-Baritone Thomas Quasthoff returns to the studio with his first solo album since 2010. Nice ‘n’ Easy includes beloved standards such as Cry Me A River with new arrangements by Jörg Achim Keller. The results: exciting new versions of familiar jazz-classics. Quasthoff partners again with German trumpeter Till Brönner, Till’s Trio Partners Frank Chastenier, Dieter Ilg and Wolfgang Haffner as well as the unique NDR Bigband - The Hamburg Radio Jazz Orchestra. The Guardian said that Thomas Quasthoff has “none of the grim rigidity associated with the classical singer - in-stead, Quasthoff glides with a relaxed sense of swing, and a soft American accent that recalls, variously, Lou Rawls, Bing Crosby and Nat King Cole.”