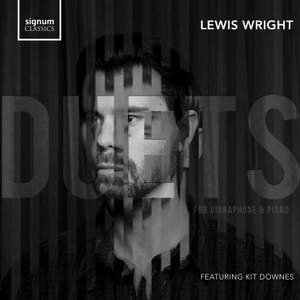 An Absence of Heart

Lewis Wright is an award-winning British vibraphonist, composer and drummer based in London. As a vibraphonist, he was nominated for Rising Star in the 2016 Downbeat International Critics Poll, was awarded Ensemble of the Year in the 2016 Parliamentary Jazz Awards with Empirical, and was awarded the Worshipful Company of Musicians prize in 2011.

He has performed at venues such as the Sydney Opera House, the Royal Albert Hall and has been a featured soloist with Wynton Marsalis and the Jazz at Lincoln Centre Orchestra.

For his debut recording he is joined by British piano virtuoso Kit Downes for a disc of his own works: “There is limited material for vibraphone and piano (especially for improvising musicians), which has the potential to be so rhythmically interesting and polyphonically grand. I set out to compose pieces that showcase the instruments and are built around the language of the musicians. The right pianist, who can speak in this particular dialect of improvisation and has similar taste in the moment, was an obvious choice. Kit and I have known each other and played together since childhood and we share many influences, musical and otherwise.” Lewis Wright, 2018