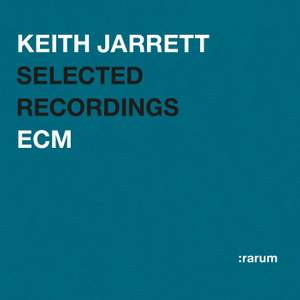 Jarrett, K: 'Long As You Know You're Living Yours

More than 30 musicians closely associated with ECM over a long period were invited to participate in the rarum anthology project. One major difference between rarum and other jazz samplers is the musicians' active participation at every step of the way: choosing and sequencing material, writing liner notes and often supplying photos from private collections.

Keith Jarrett instigates the series with an intriguing double album. As well as featuring material by the perennially popular Jarrett/Peacock/DeJohnette trio and the European Quartet with Jan Garbarek, Palle Danielsson and Jon Christensen, Jarrett gives a very wide overview of his work as solo improviser. The culmination of his 1981 Munich solo piano concert is here (released on CD for the first time), as well as selections from the 1987 Tokyo concert released as Dark Intervals and the encore from the 1981 Bregenz concert. Four selections with Keith as improvising organist include "Hymn of Remembrance" (also appearing on CD for the first time). Jarrett also looks again at his highly innovative clavichord improvisations from Book of Ways and chooses pieces from the 1985 Spirits tapes which variously feature him on soprano saxophone, flute, recorders, piano, tabla and percussion.