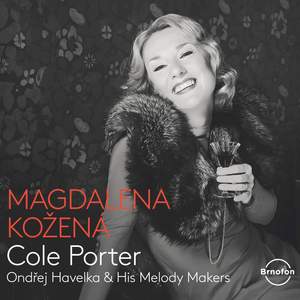 Ondřej Havelka and His Melody Makers

Porter, C: Always True To You In My Fashion

Porter, C: It's Alright With Me

Porter, C: You're The Top

Porter, C: You'd Be So Nice to Come Home to

The world-famous mezzo-soprano decided to leave the world of classical music behind for a while and embarked on a gentle flirtation with the ‘light muses’. She chose a truly soulful and immensely witty author for her excursion into the world of classical American musical – Cole Porter. She will sing his renowned, jazz inspired hits to the accompaniment of Ondřej Havelka and His Melody Makers, an orchestra which ranks among the world’s leaders in authentic interpretation of jazz, swing and dance music of the 1930s and 1940s. The album is released by new Magdalena´s recording label Brnofon and distributed by Supraphon. You can enjoy the famous melodies Night And Day, I’ve Got You Under My Skin, Love For Sale or Begin To Beguin sung by Magdalena Kožená who invites you to listen by saying: Let’s Misbehave!

“I fell in love with Cole Porter’s songs and the music of that period during the years when I was a student. I am a great admirer of Ella Fitzgerald, Billie Holiday, Peggy Lee and other jazz legends. Their recordings are still amongst my favourites… I was inspired by listening to the songs of Cole Porter performed by Frederica von Stade, whom I admire greatly. Without in any way endeavouring to alter her singing style, she gave Porter’s songs great charm and brought them into a different, interesting dimension. So, I decided that I would try and present my own take on these timeless melodies to audiences.” Magdalena Kožená