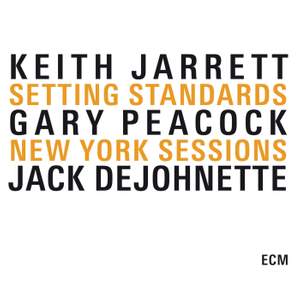 Robert Wesley Troup Jr., Leah Worth: Meaning Of The Blues

Rodgers, R: It Never Entered My Mind (from Higher and Higher)

Herbert Magidson, Allie Wrubel: The Masquerade Is Over

Kern: In Love In Vain

Ralph Rainger, Leo Robin: If I Should Lose You

Styne: I fall in love too easily

This reissue of the first days of Keith Jarrett’s “Standards” project - with Gary Peacock and Jack DeJohnette brings together the albums “Standards Vol. 1”, “Standards Vol. 2” and “Changes”, recordings made in a sustained burst of creativity in 1983. Now re-released as a boxed set to celebrate 25 years of the Jarrett/Peacock/DeJohnette trio, “Setting Standards” also sets the stage for a new series of ECM reissues (which will be continued with further releases in 2008).