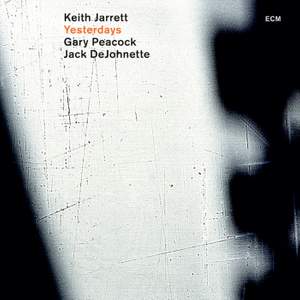 Rodgers, R: Present Arms: You Took Advantage Of Me

Parker, Charlie: Scrapple from the Apple

Keith Jarrett, Jerome Kern: Intro / Smoke Gets In Your Eyes

Released simultaneously on CD and vinyl (180 gram pressing - the first new ECM vinyl album in 15 years), the most successful piano trio in the world plays the repertoire that most delights its vast audience: music from the Great American Songbook. The set has a focus on bebop with Charlie Parker's "Scrapple from the Apple", "Shaw'nuff" by Parker and Dizzy Gillespie, and Horace Silver's "Strollin'". There is also a dazzling dash of ragtime in the shape of "You Took Advantage of Me", and beautiful ballads including Jerome Kern's "Yesterdays" and "Smoke Gets In Your Eyes", all performed with a flair seldom equalled in the history of jazz.