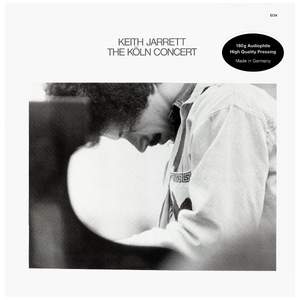 An adept at solo recitals (his Facing You for ECM in 1970 was a strong harbinger), he began a series of in-concert recitals for Manfred Eicher’s label that attracted acclaim and increasing public... — Jazzwise, 100 Albums That Shook the World More…

Talk about behemoths - this week I pull out The Köln Concert, Keith Jarrett's game-changing solo album. Over forty years later it hasn't lost any of its power.

For the first time in many years The Köln Concert is being made available by ECM in double 180grams audiophile vinyl. ECM's No.1 selling album, is also the best selling solo piano album of all time. MOJO magazine has recommended it as their favourite ECM album, in their 'How to Buy ECM' guide, "confirms his genius...a masterpiece."

100 Albums That Shook the World

An adept at solo recitals (his Facing You for ECM in 1970 was a strong harbinger), he began a series of in-concert recitals for Manfred Eicher’s label that attracted acclaim and increasing public interest, but no-one was prepared for what happened to The Köln Concert when it appeared.

It certainly works as pleasant background music, but to properly take the trip with Jarrett it’s best to focus and appreciate the delicate balancing act that he is undertaking. Marvel at how the melodies gradually gain in stature to the point where he can pound them out in triumph, and then convincingly retreat, allowing the germ of another idea to grow.