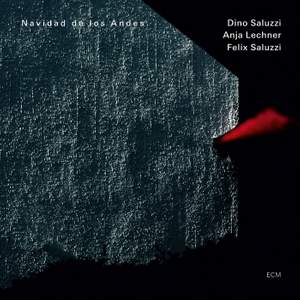 Highly attractive and very special debut recording of a new trio - Argentinean bandoneon master Dino Saluzzi, German cellist Anja Lechner and Dino's saxophonist brother Felix Saluzzi - with a lot of shared history. Navidad de los Andes (Andean Nativity) has its own distinct character, at once simple and elusive, like the magical realist tales of the region. Dino's yearning music captures the sounds of birds in the mountain forests, glimpses of dance halls and village churches, memories carried by the wind.

Brothers Dino and Felix Saluzzi have more than 60 years of collaborations behind them. They started making music together as children in Argentina, and Felix frequently plays in Dino's "family band" projects (as heard on ECM albums including 'Mojotoro' and 'Juan Condori'). Anja Lechner and Felix Saluzzi both appeared as soloists on Dino's orchestral recording 'El Encuentro' in 2009, a shared pleasure in the work leading to the formation of the new group.

Anja Lechner has worked closely with Dino since the mid-1990s, beginning with the Kultrum alliance between Saluzzi and the Rosamunde Quartet. She has also toured widely in duo with the bandoneonist, and recorded with him on the critically-acclaimed 'Ojos Negros' in 2006.

The three musicians have arrived at a very unique sound-blend with bandoneon, cello, and clarinet (or sax), very integrated in a chamber music format that breathes with the apparent effortlessness of folk music. Neither "jazz" nor "classical" nor tango in a strict sense, temperamentally between the genres, Dino Saluzzi can hardly help but be 'intercultural'. This open-minded music likewise speaks to a large audience.