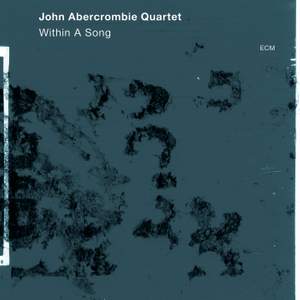 McHugh: Where Are You?

On his latest album, Within a Song, the great American guitarist John Abercrombie (along with Joe Lovano, Drew Gress and Joey Baron) pays tribute to formative influences, to the recordings and the musicians that shaped his early listening and his future directions. The period addressed is the 1960s, with specific reference to key recordings by Miles Davis, Sonny Rollins, Ornette Coleman, John Coltrane and Bill Evans. Revisiting some classics of the era, this is effectively a modern jazz primer but it's also much more.

"Manfred Eicher and I had been talking for a while about doing an album that might pay homage to a particular jazz artist or composer. But in the end I preferred to look at the era when my own musical tastes were shaped. The recordings that I was listening to back then were mostly post-bebop jazz albums, usually by artists who were stretching the forms, in their various ways." Among the songs celebrated here are "Where are You", from Rollins' The Bridge, Coleman's "Blues Connotation", Coltrane's "Wise One", Evans' "Interplay" and "Flamenco Sketches" by Miles. The quartet also plays some of Abercrombie's own compositions.

Guitarist Abercrombie and tenorist Joe Lovano convey their empathy with the original protagonists, while also bringing much of their own creativity into service. There is superlative playing from both of them, with encouragement and alert support from drummer Joey Baron and bassist Drew Gress, also vital contributors to the project.

Abercrombie and Joe Lovano have previously collaborated on ECM for John's 1998 album Open Land. They have many a shared jam session behind them. Abercrombie had a quartet for a while with Lovano, Steve Swallow and drummer John Riley. John and Joe also toured internationally with French bassist Henri Texier's groups.