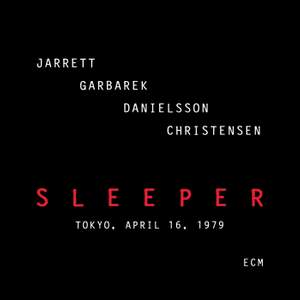 Jarrett, K: Chant Of The Soil

An astonishing double-album documentation of a great band at the peak of its powers, Sleeper features a complete and previously unreleased concert recording of the quartet that came to be known as Keith Jarrett's 'European Quartet' (also sometimes named as 'Belonging'). It took place at Tokyo's Nakano Sun Plaza in April 1979.

The pieces, all composed by Keith Jarrett for this ensemble and all delivered with enormous verve, are 'Personal Mountains', 'Innocence', 'So Tender', 'Oasis', 'Chant of the Soil', 'Prism' and 'New Dance'. Exceptional improvisational exchanges, dynamic episodes of surging energy, and lyrical passages of wild beauty abound. The interplay between Jarrett and Jan Garbarek is uncanny and the Palle Danielsson/Jon Christensen rhythm team swings wildly and delightfully. After more than three decades in the ECM archive, this "Sleeper", newly mixed at the Rainbow Studios in Oslo, now awakes in all its glory, sounding thoroughly alive and of the moment.

Sleeper is a significant addition to the group's small discography, until now comprised of the albums Belonging (1974), My Song (recorded 1977, released 1978), Nude Ants (recorded 1979), and Personal Mountains (1979, released 1989). In the five years between the first album and the end of the story, the quartet played infrequently enough for Jarrett to tell one journalist that it was less an ensemble than a 'special event'.