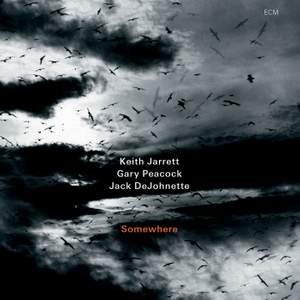 Harold Arlen, Ted Koehler: Between The Devil And The Deep Blue Sea

Johnny Mercer, Jimmy van Heusen: I Thought About You

The "Somewhere" in which Keith Jarrett, Gary Peacock and Jack DeJohnette - the 'Standards' trio - find themselves is Lucerne, Switzerland, in the year 2009, with a performance both exploratory and in-the-tradition. This sparkling concert from one of the great groups of jazz is the trio's first album since 'Yesterdays' was released in 2009, and it comes in the 30th year of the "Standards" project.

The Neue Zürcher Zeitung headlined its review of the show "Kontrollierte Ekstase" - controlled ecstasy - an apt metaphor for a set that begins in improvisational "Deep Space" modulates into Miles Davis's "Solar", soars through the standards "Stars Fell On Alabama" and "Between The Devil And The Deep Blue Sea" and climaxes with an extended romp through "West Side Story", as Bernstein's "Somewhere" and "Tonight" are bridged by the freely associative Jarrett original "Everywhere".

The closing encore "I Thought About You" makes an arc back to the Miles Davis references at the beginning. Miles played this on 'Someday My Prince Will Come', and it was in the Davis band book for years. Keith, Gary and Jack recorded it previously when paying tribute to Miles on "Bye Bye Blackbird".

"This formation remains one of the best, not just of this, but of all times," wrote Jürg Meier, reviewing the Lucerne concert of Jarrett, Peacock, DeJohnette in the Neue Zürcher Zeitung. "Their engagement with the Great American Songbook, the standards of jazz, is exemplary in the simultaneity of absolute respect for the material and absolute freedom in dealing with it." The songs are honoured for their melodic strengths and credited with sufficient robustness to support fiery improvisation that scales a heaven of invention.