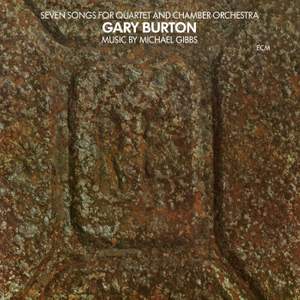 By Way Of A Preface

The Rain Before It Falls

At the beginning of 2014, ECM issues seven important recordings from its back catalogue, all in 180g vinyl and CD, most of which have been out of stock for many years. For both CD and LP versions, the original analog recordings are issued in deluxe cardboard sleeves. Five of the albums, including Seven Songs for Quartet and Chamber Orchestra from vibraphonist Gary Burton, have never before been released on CD.

Sounding as fresh today as it did in 1973, Seven Songs places the Gary Burton Quartet in an orchestral context, with compositions of Michael Gibbs - inspired by Messiaen and Charles Ives as well as Miles and Gil Evans - and some exceptional soloing by Mick Goodrick, Steve Swallow and Burton himself. The production is exemplary: Seven Songs set a new standard for recordings of orchestral jazz.