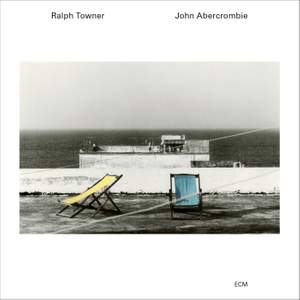 Towner: Half Past Two

Sargasso Sea in 1976 was the debut duo disc of great American guitarists Ralph Towner and John Abercrombie. On their follow-up recording Five Years Later - and it did come in 1981 - their improvisations draw on a wider sonic palette, to telling effect. That recording is now being re-issued for the first time on CD, simultaneously with a 180g vinyl version.

"Something special happens when they play together" observed Robert Palmer in the New York Times, and the participants concurred. "Playing with John is one of my favourite things to do," said Ralph Towner. "I can play as much as when playing solo, and still get to ply my skills as accompanist. John is such an amazing person to play with that, even when he's playing intensely or aggressively, we somehow fit together and there's really no way that we could collide."

At the beginning of 2014, ECM issues seven important recordings from its back catalogue, all in 180g vinyl and CD, most of which have been out of stock for many years. For both CD and LP versions, the original analog recordings are issued in deluxe cardboard sleeves.