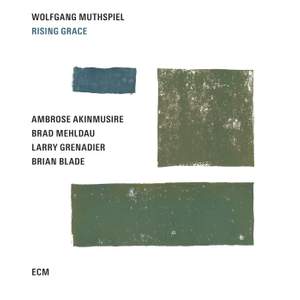 Wolfgang Muthspiel whom The New Yorker has called - a shining light - among todays jazz guitarists made his ECM leader debut in 2014 with the trio disc Driftwood, featuring him alongside two long-time colleagues, bassist Larry Grenadier and drummer Brian Blade.

All About Jazz declared the album - sublime - while JazzTimes praised its - rapt atmospheres - calling Driftwood haunting.

For his follow-up Rising Grace the Austrian guitarist has convened a very special quintet, adding jazz luminary Brad Mehldau on piano and a star among young trumpeters, Ambrose Akinmusire, to the subtly virtuosic Grenadier/Blade rhythm section.

The lyrical flights of Akinmusires trumpet and the probing improvisations of Mehldau run through Muthspiels rich set of compositions like golden threads, the tracks including a warm tribute to a late, great ECM artist, Kenny Wheeler (Den Wheeler, Den Kenny).