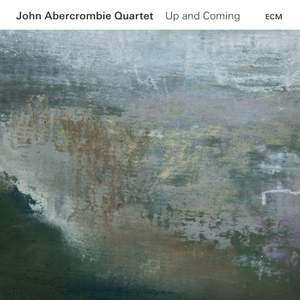 Offer, Up and Coming

John Abercrombie: Up And Coming

Guitarist John Abercrombie - who has recorded as a leader for ECM since 1974 - returns with a second album by his quartet featuring Marc Copland on piano, along with longtime rhythm partners Drew Gress and Joey Baron. Extolling 39 Steps, the group's 2013 album, the Financial Times said: "The emphasis is on subtle intrigue, flowing lyricism and the interplay between the leader's warm, cleanly articulated guitar and Copland's piano… with bassist Gress and drummer Baron equally supple and sinewy companions." The same virtues of lyrical melody and harmonic/rhythmic subtlety are apparent with the new Up and Coming, though with even more emphasis on the enduring values of song. Abercrombie's liquid phrasing and glowing tone – enabled by the thumb technique he has honed since eschewing a plectrum in recent years – animate his five originals and the pair by Copland, as well as a take on the Miles Davis classic "Nardis" done in the spirit of Bill Evans. Up and Coming has a twilight atmosphere, with melodic flow the guiding light. Personnel: John Abercrombie (guitar), Marc Copland (piano), Drew Gress (double-bass), Joey Baron (drums).