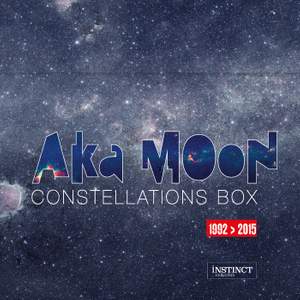 Birds Talk to You

Indentification with the Tree

Elohim on the Moon

Story Telling's On (For Jayne Cortez)

Elohim on the Water / For Days on End (For Philippe Boesmans)

The River Blue (For Michel Hatzi)

Cassol: Part 1 (Genese, The Lake, the Light and the Mountain, Inner Fire, Birth of Ganga)

Cassol: Part 3 (The Calls, Stone of Wisdom, After Accomplishment, School of Mysteries)

Ursula and the Wind Dance

Cassol: The Last Call from Jaco

Cassol: From Influence to Innocence

Cassol: aKa 99 (after the Sonatas of Domenico Scarlatti)

Cassol: Elohim on the Moon

Cassol: Birds Talk to You

Cassol: Identification with the Tree

The box set event of the season! Since 1992, the year Aka Moon was formed, a series of albums has marked the history of the legendary jazz trio, which this set of twenty albums now gives you a chance to relive. After a journey of initiation in Central Africa with the Aka Pygmies, Fabrizio Cassol, Michel Hatzigeorgiou and Stéphane Galland embarked on a wide-ranging musical exploration that was then totally innovative, notably in its rhythmic aspects. Very soon their music continued to grow through contact with a succession of eminent musicians from all over the world. The first big impact came from India; two albums were recorded there and the encounter with the great Carnatic percussionist U. K. Sivaraman (southern Indian music) left a lasting mark on the group. Then it was back to Africa and a meeting with the master of the Senegalese sabar Doudou N’Diaye Rose that created new musical ‘constellations’. And these were only the first of many. For example, there was the collaboration with a Big Band of DJs, with musicians from the Balkans, or the incursion of the sonatas of Domenico Scarlatti into a jazz quartet... To discover or rediscover this unique music is a very special experience, a cure for formalism and an inexhaustible source of inspiration. The twentieth ablum in the box is a previously unreleased recording: Light Ship Trio.