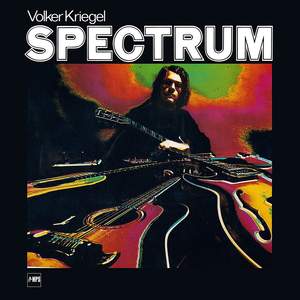 So Long, For Now

In 1971, 27‐year‐old guitarist Volker Kriegel gifted MPS one of his most amazing recordings ever ‐ the second one under his own name, while at the same time playing a parallel role as guitarist with the popular group the Dave Pike Set. In this quintet lineup, Kriegel’s amazing qualities fan out into the areas of jazz‐rock, lyrical folk and free jazz. There are the familiar sitar‐Indie‐rock tones, familiar to listeners through Kriegel's play with Dave Pike: "Zoom" opens the album with an electrified jolt, and it’s not just because of Kriegel’s overpowering trance‐like solos – Peter Trunk’s grooving bass lines and Cees See’s driving percussion also have their say. "So Long For Now", delights with its relaxed blues‐rock feel which finds Trunk and drummer Peter Baumeister in intimate dialogue as they hook up with Kriegel’s silky‐smooth, flowing lines and John Taylor’s smoldering Electra‐piano play. The savvy rondo "More About D" and "Instant Judgment" thrillingly showcase the group’s seamless integration of lyrical, swinging passages with freely cascading sounds. And then out of the blue there appears "Suspicious Child, Growing Up". Bluesy, folk‐hued, and easy‐going, its offhandedness is outdone only by the dreamy ballad "Ach Kina". In the finale, Kriegel and his cohorts once again focus on the whole “Spectrum” in a fantastic, dancing interplay of smoldering keys, stratospheric cello lines, a complexity of percussion rhythms and virtuoso guitar play adorned with soulful whimsy.