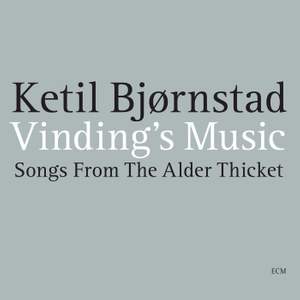 Songs From The Alder Thicket

Bjørnstad: So Far, So Hidden

Bjørnstad: The Stones, The River

To celebrate the 60th birthday of Norwegian jazz pianist/composer/novelist and poet Ketil Bjornstad, ECM issues a double album as "literary soundtrack", its release also coinciding with the Norwegian publication of the one-volume edition of Bjornstad's highly-acclaimed fictional 'Vinding' trilogy, 'To Music', 'The River' and 'The Lady in the Valley'.

After keeping his musical and writing activities entirely separate for decades, Renaissance Man Bjornstad dissolved the boundaries with his 'Vinding' books: "When I had the idea of writing a trilogy about the young piano student Aksel Vinding, I realised that I would have to grant music access to my world of writing. This felt surprisingly liberating, almost like a confession. Music is a powerful source of inspiration for many writers, and so it was for me when I relived, through the novels, my experiences as a young piano student in Oslo in the late 1960s and early 1970s."

When the trilogy was completed, a concert of music referenced in Bjornstad's narrative was mounted in Oslo. A recording from that evening comprises volume two of the Vinding's Music set. Pianists Jie Zhang and Gunilla Süssman perform pieces by Beethoven, Chopin and Debussy, and each plays a movement from Piano Concertos by Rachmaninov or Ravel with the Norwegian Radio Orchestra conducted by Christian Eggen. Eggen is also heard as piano soloist in part of Mozart's Piano Concerto in A major, K488, while the disc ends with Samuel Barber's famous Adagio for strings.

Disc one features Ketil Bjørnstad as improvising solo pianist over nine tracks, meditating upon themes related to his protagonist. It's in the role of improvising pianist that Bjornstad has mostly been heard on ECM, but he did begin his performing career as a teenage classical soloist, playing Bartok with the Oslo Philharmonic Orchestra. Among his notable ECM jazz recordings are Water Stories, The Sea and The Sea II, Life in Leipzig and recently Remembrance, a trio album with Tore Brunborg and Jon Christiansen.