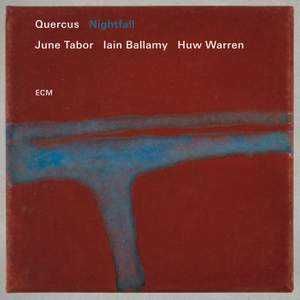 Stories of lost loves, wartime strife and forlorn hope are handled with a lugubrious grace of which Dowland would have been proud. — BBC Music Magazine, June 2017

trad.: Once I Loved You Dear (The Irish Girl)

trad.: The Shepherd And His Dog

Bernstein: Somewhere (from West Side Story)

Quercus’s self-titled ECM debut won the album-of-the-year award of the German Record Critics in 2013, was widely praised by the international press, and especially celebrated in Britain where June Tabor has long reigned as “the dark voiced queen of English folk music” (to quote The Times). Folk and jazz and chamber music become one in Quercus’s world, where recontextualizing of material is part of the process, prompting listeners to pay heightened attention even to familiar songs. Nightfall opens with the most famous of farewells in “Auld Lang Syne”, and gently breathes new life into it, leading us into a programme that includes Bob Dylan’s “Don’t Think Twice”, the jazz standard “You Don’t Know What Love Is” and the West Side Story ballad “Somewhere”, as well as original compositions by Huw Warren and Iain Ballamy and songs from British folk tradition, in stark and moving new arrangements.

Stories of lost loves, wartime strife and forlorn hope are handled with a lugubrious grace of which Dowland would have been proud.