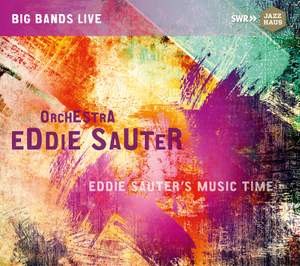 Isham Jones: It Had to Be You

Basie: Easy Does It

Sauter, Eddie: Three on a Match

Eddie Sauter, who was originally a trumpeter and had been part of the competence team of Benny Goodman, took over Kurt Edelhagen’s orchestra at the Südwestfunk (SWF) in 1957. Here he had the first time in his career the freedom of conducting a jazz Big Band without a co-leader– which was a great opportunity, but turned out to be also a lot of stress. In 1959 Sauter returned to the United States and there proved his talent for creating a transparent presence with works of film music and the album Focus (1961) by Stan Getz.

In his music, Sauter managed to transfer a cool reduction of bebop bustle into large form without seeming too cool himself. The broadcast concert series Eddie Sauter’s Music Time became the podium for his experiments. The recordings from the SWR archives were made in the winter of 1957/58 at, among other places, Freiburg and Kaiserslautern, and document a programme which, carried off with plenty of American humor, held the balance among standards, originals and experiments.