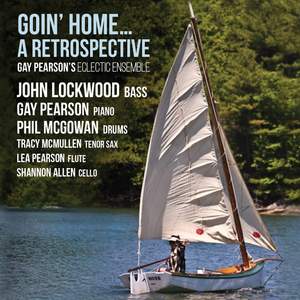 Romberg, S: Softly as in a morning sunrise (from The New Moon)

Carole King: So Far Away

Rowles: The Peacocks for double-bell trumpet and prepared piano

Arlen: This Will Be My Shining Hour

GOIN’ HOME… A RETROSPECTIVE is pianist and composer Gay Pearson’s second release on Big Round Records. The album is a live recording of her most recent annual chamber-jazz concert, featuring an eclectic ensemble with Gay Pearson on piano, John Lockwood on bass, Phil McGowan on drums, Tracy McMullen on saxophone, Lea Pearson on flute, and Shannon Allen on cello. This varied ensemble performs a wide variety of music with different instrumental combinations, from Astor Piazzolla to classic tunes of Chick Corea, Harold Arlen and Jerome Kern, to more contemporary original compositions by Pearson herself. Quoting Pearson, “My compositions do not always begin with a simple idea of a single chord, but it is important to note that I always hear harmony first, out of which melodies may or may not evolve. My favorite and easiest approach is to change one note of a chord at a time and see where that takes me, or to start with a harmonic sequence, then decide how long it should be, at what intervals it will repeat.” This can be seen primarily in the sequence she utilized in her piece Chromatic Exploitations. In her piece Pent-Up Love, Pearson fuses pentatonic riffs with inspiration from saxophonist Tracy McMullen’s My Truculent Paradise and suggestions of John Coltrane’s A Love Supreme, creating an entirely new and energetic contemporary jazz tune filled with technical improvisational skills and quartal harmonies. Sea Journey and So Far Away, written by Chick Corea and Carole King, respectively, are co-titles of Pearson’s 2004 studio release. Inspired at the time by her move back from her home in Trenton NJ to Falmouth ME, Pearson was inspired to revisit and rework these pieces as well as in advance of her next move, “Goin’ Home” again, ultimately back to Newburyport MA. These newest versions are refined live performances, including a compelling bass/piano duo within Pearson’s arrangement of So Far Away. Also revisited was her milestone and probably unique arrangement of Romberg's Softly As In A Morning Sunrise which included 6 reharmonizations for 6 duets, each for different combinations of flute, cello, viola and bass from her 1998 release ALONE INDEPENDENT AND UNRESOLVED. Key Points: · Music reviewer Jim Santella, of Cadence raves "Pearson gives her audience a double barrel of swinging excitement that's married with a love for the lyrical melody." · The works on this album contain a wide, stylistic variety of tones and textures showcased through many genres, capturing in all cases the technical and passionate presence of Pearson and her eclectic ensemble. · GOIN’ HOME: A RETROSPECTIVE is Gay Pearson’s second album release with Big Round Records. Her first album, A SINISTER ENDEAVOR, was released in July of 2015 and can be sampled at www.bigroundrecords.com/catalog/br8941 · GOIN’ HOME: A RETROSPECTIVE was recorded in front of a live audience in the Unitarian Parish Hall in Gay Pearson’s hometown, Newburyport MA. · This album features four original compositions by Gay Pearson: C-SAW, Chromatic Exploitations, Positive Vorticity Advection, and Pent-Up Love. · Gay Pearson is in her 9th year studying advanced improvisation and composition with Vardan Ovsepian and has performed her compositions for the Back Cove Contemporary Composer’s Festival from 2011-2015