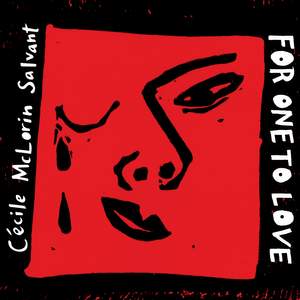 For One to Love

Cécile McLorin Salvant: Look at Me

Martin, Hugh: The Trolley Song (from Meet Me in St Louis)

Cécile McLorin Salvant's debut album, 'WomanChild', went on to earn a bevy of honours, including a Grammy nomination, and Cécile found herself at the top of multiple year-end critics' lists. Now she releases her follow-up album, 'For One to Love', a more intimate and confessional project that reveals new dimensions of this young vocalist's artistry.

"I'm not playing anyone else here but myself," McLorin Salvant explains. "I can look at many of these songs, and see that this is an event that really happened, or a feeling I've lived through myself. That's what makes it so difficult to share. It's almost like a diary entry."

Cécile is increasingly making her strongest musical statements via her own compositions, which stand out as the centerpiece on this project. Five of the tracks on 'For One to Love' are her songs, and here she reminds us of those other great jazz singers, from Billie Holiday to Abbey Lincoln, who found that the most powerful expressions of moods and feelings often came via their own compositions.

This may be the defining jazz statement on romance in the new millennium, a heartfelt album that both embodies the full range of the American popular song idiom, but distills it into a distinctly personal expression of a modern-day poet-troubadour.

"If anyone can extend the lineage of the Big Three - Billie Holiday, Sarah Vaughan and Ella Fitzgerald - it is this 23-year-old virtuoso." - The New York Times