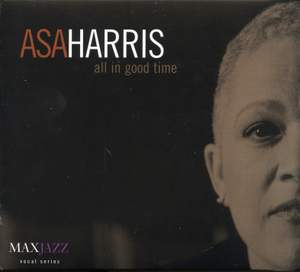 All in Good Time

Mandel, J: A Time for Love

Maxwell Anderson: It Never Was You

You may not think of jazz and a Catholic education in the same scenario, but for Asa Harris freedom and discipline are two sides of the same coin. She was raised in Philadelphia in what has been referred to as one of America's First Families of Jazz. Her father, Ace Harris, was a renowned pianist, singer and arranger for the Ink Spots and her uncle was famed swing-trumpeter Erskine Hawkins, who wrote the classic Tuxedo Junction. Growing up with a strong Catholic influence, she eventually took the jazz path via theatre, and even recently featured with Robert Duvall in the film A Family Thing. She is currently the principal vocalist with Gene Esposito's Jazz Idiom Orchestra in Chicago, performing the music of Billy Strayhorn.