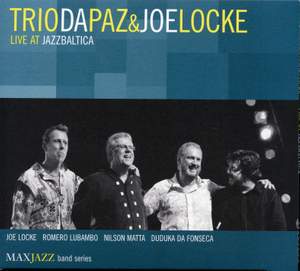 Kern: Very Warm for May

Very Warm for May: All the Things You Are

Jobim: Look to the Sky

Kicking off the "band series" on MaxJazz, a live recording of the band Trio Da Paz accompanied by Joe Locke. Trio Da Paz features three of Brazil's most-in-demand musicians including guitarist and MaxJazz recording artist Romero Lubambo, bassist Nilson Matta and drummer Duduka Da Fonseca. The recording pairs Trio Da Paz with vibraphonist Joe Locke in a memorable performance at the 2007 JazzBaltica festival in Salzau, Germany. Their set features several original compositions by members of the group as well as standards by Jobim and by Hammerstein and Kern.