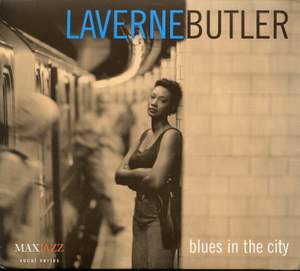 Blues in the City

Please Send Me Someone to Love

Joe Derise: The Blues are Out of Town

Arlen: The Sky's the Limit

The Sky's the Limit: One for My Baby

Frank Sinatra: I'm a Fool to Want You

Tormé: Born to Be Blue

LaVerne Butler: All that I Know

Woodrow Buddy Johnson: Since I Fell for You

LAVERNE BUTLER grew up in Shreveport, Louisiana, and developed her love for jazz while performing on stage with her father, saxophonist Scott Butler. After becoming a vocalist with the jazz band at the University of New Orleans, Laverne went to Bourbon Street. There, she became a regular in her own right on the New Orleans jazz scene. But it was the great vocalist Jon Hendricks who encouraged her to"think like an instrument" and move to New York. The rest is history and her regular appearances at clubs, festivals and on album never cease to create a huge buzz. LAVERNE BUTLER (vocals), JOHN WEBBER (bass), KLAUS SUONSAARI (drums), AVA BUTON & JANET HALL GIVENS (backing vocals).