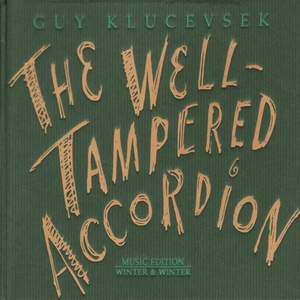 Klucevsek: One Less Bell to Answer

Klucevsek: Raindrops Keep Fallin' on My (Wives and Lovers) Head

A quarter century ago, there was very little "serious" American music for the accordion. Now, there's a sizable body of music – both serious and silly, often at the same time. And it's largely because of a single New York-based accordion virtuoso and composer with an unpronounceable name and the ability to play virtually anything when he straps on his ungainly batch of reeds. Guy Klucevsek (pronounced Kloo-SEV-ek; the "s" is silent) has inspired dozens of the world's finest contemporary composers to write pieces in as many different styles for him, and what they haven't written, he has. Klucevsek's own works, collected in "The Well-Tampered Accordion", include a musical/historical tour of America's multiethnic immigrant communities; an impressionist suite based on Michael Cunningham's novel "The Hours", and the album's title track, which Klucevsek describes as "a summation of everything I’ve been doing for the past 20 years".

Since the 1980s Guy Klucevsek has demonstrated how unlikely opposites can work together: the populist, image-challenged accordion would have been no one’s first choice of instrument in the hipper-than-thou Downtown music scene… until Guy Klucevsek came along. He also disproved the notion that serious music and a sense of humor are incompatible. Klucevsek is serious about music but he's not somber – his punning titles range from the spectacularly awful ("Donut Ask, Donut Tell") to the merely weird ("Life, Liberty, and the Prosciutto Happiness"). "The Well-Tampered Accordion" indicates not just his relentless humor but also the scope and sweep of his music – after all, you don't play with allusions to the Bach masterpiece "The Well-Tempered Clavier" unless you feel strongly about your material.

The album's title track is a tuneful, stylish, and technically demanding collection of twelve studies, preludes, dances and the like. Held together by recurring themes and what Klucevsek calls simply "my love of pure melody and rhythm", "The Well-Tampered Accordion" romps through musical styles and genres without sounding like a pastiche.

Two of the other major works on this release have a strong connection to recent masterpieces of American fiction. Michael Cunningham's "The Hours" inspired Klucevsek's "Four Portraits", a suite of musical musings on the four main characters in Cunningham's acclaimed novel (and film). Commissioned for the 2003 La Milanesiana festival, the work was premiered on a shared program with Cunningham reading excerpts from the book. Klucevsek initially thought that the book’s shifting between three different time periods might suggest a musical structure as well; "but that", he says, "seemed too dry and intellectual an approach for me. What finally enabled me to see a way into it was the character of Laura." Starting with a character who walks out on her young child and essentially vanishes into thin air, Klucevsek found the whole piece flowing spontaneously and tying itself thematically to the other portraits in the suite.

"Accordion Misdemeanors" is even closer to Klucevsek's heart, since it was written as a series of short pieces for the audio book version of Annie Proulx's novel "Accordion Crimes". The book follows an accordion on its travels across America, as it finds itself passed from one immigrant community to another in what Klucevsek describes as "an exposé of the dark side of the American immigrant experience". For an accordion player from an Eastern European immigrant community in Pennsylvania’s coal-mining country, who’d spent years playing and studying accordion musics from around the world, this was the ideal job – "I was born to do this project", he says. Taking the short interludes that dot the audio book, Klucevsek fleshed out the material and wove it into a nine-part suite, creating a musical journey through the Sicilian community of New Orleans, the Basques in Montana, the Germans in the Midwest, and the Acadians of Maine, among others.

"The Well-Tampered Accordion" also includes two inventive, good-natured arrangements of the songs of Burt Bacharach: "One Less Bell To Answer", and the medley "Raindrops Keep Falling On My (Wives And Lovers) Head". Both of these, along with "Accordion Misdemeanors", have been rescued by Winter & Winter from out-of-print oblivion. The title track and "Four Portraits" are released here for the first time. This release is Klucevsek’s fourth for Winter & Winter, and his first since the collaboration with sax player/composer Phillip Johnston, given the groan-inducing title "Tales from the Cryptic". Previous albums include "The Heart of the Andes", another collection of original compositions, many based on Klucevsek’s ongoing music/theater work; and "Accordance", a duo record with fellow keyboardist Alan Bern.