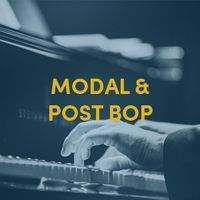 Modal jazz is a style of jazz music that focuses heavily on musical modes, often shifting between them within a single piece rather than staying around one tonal centre. Some of the earliest and most influential modal jazz recordings were made by Miles Davis, such as his tune 'Milestones' and album 'Kind of Blue'. Post-bop developed out of a mixture of modal, avant-garde, hard bop and free jazz, though the term is still somewhat loosely defined. Miles Davis' second quintet, as well as the classic John Coltrane Quartet, were considered at the forefront of the post-bop sound.