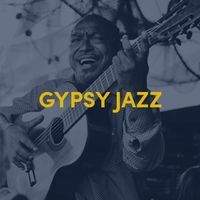 Gypsy jazz (also known as jazz manouche) is a style of jazz music originating from Romani guitarist Django Reinhardt, as well as his work with French jazz violinist Stéphane Grapelli. The term 'jazz manouche' comes from the French Sinti Romanis, also known as Manouche clan. The style was popular throughout Europe during the swing era around the Second World War, falling out of popularity once bebop came into fashion - though a revival was eventually started in the 1970s helped by the Festival Django Reinhardt in 1968.