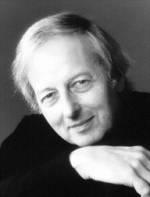 André George Previn was a German-American pianist, composer, and conductor. His career had three prongs: Hollywood, jazz, and classical music. On each he achieved success, and the latter two were part of his life until the end. In the movies, he arranged music and composed. In jazz he was a celebrated trio pianist, a piano-accompanist to singers of standards, and pianist-interpreter of songs from the “Great American Songbook.” In classical music he worked as a pianist too but gained television renown as a conductor, and during his last thirty years created his legacy: as a composer of art music.