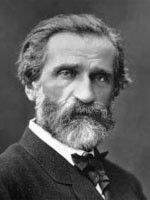 Giuseppe Fortunino Francesco Verdi was an Italian composer best known for his operas. He was born near Busseto to a provincial family of moderate means, receiving a musical education with the help of a local patron. Verdi came to dominate the Italian opera scene after the era of Gioachino Rossini, Gaetano Donizetti, and Vincenzo Bellini, whose works significantly influenced him.