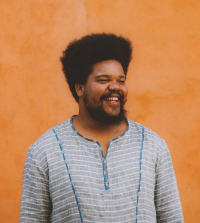 Amaro Freitas is a Brazilian pianist, whose style is equally influenced by Charlie Parker and Thelonious Monk as it is the sounds of his native Brazil. Initially learning the piano while attending church, Freitas's lightbulb moment was seeing a DVD of Chick Corea live in concert. Growing up in the slums of northern Brazil, his family did not own a piano, instead practicing at a local restaurant outside of opening hours. After becoming a highly sought-after pianist in his city of Recife, he formed the Amaro Freitas Trio in his early 20s.

The Brazilian pianist explores his cultural heritage with the exciting and creative Sankofa, conceptualised around African philosophy and Afro-Brazilian history.