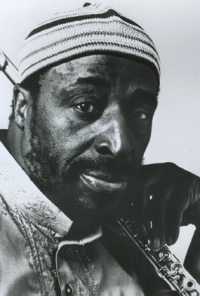 Yusef Abdul Lateef was an American jazz multi-instrumentalist, composer, and prominent figure among the Ahmadiyya Community in America.

Although Lateef's main instruments were the tenor saxophone and flute, he also played oboe and bassoon, both rare in jazz, and non-western instruments such as the bamboo flute, shanai, shofar, xun, arghul and koto. He is known for having been an innovator in the blending of jazz with "Eastern" music. Peter Keepnews, in his New York Times obituary of Lateef, wrote that the musician "played world music before world music had a name".

Lateef's books included two novellas entitled A Night in the Garden of Love and Another Avenue, the short story collections Spheres and Rain Shapes, also his autobiography, The Gentle Giant, written in collaboration with Herb Boyd. Along with his record label YAL Records, Lateef owned Fana Music, a music publishing company.