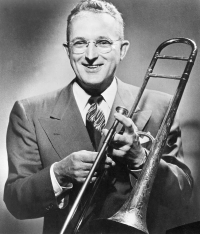 Thomas Francis Dorsey Jr. was an American jazz trombonist, composer, conductor and bandleader of the big band era. He was known as the "Sentimental Gentleman of Swing" because of his smooth-toned trombone playing. His theme song was "I'm Getting Sentimental Over You". His technical skill on the trombone gave him renown among other musicians. He was the younger brother of bandleader Jimmy Dorsey.