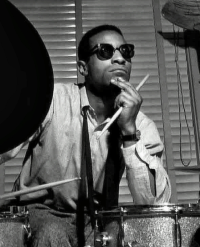 Maxwell Lemuel Roach was an American jazz drummer and composer. A pioneer of bebop, he worked in many other styles of music, and is generally considered one of the most important drummers in history. He worked with many famous jazz musicians, including Coleman Hawkins, Dizzy Gillespie, Charlie Parker, Miles Davis, Duke Ellington, Thelonious Monk, Abbey Lincoln, Dinah Washington, Charles Mingus, Billy Eckstine, Stan Getz, Sonny Rollins, Eric Dolphy, and Booker Little. He was inducted into the DownBeat Hall of Fame in 1980 and the Modern Drummer Hall of Fame in 1992.

Roach also co-led a pioneering quintet along with trumpeter Clifford Brown and the percussion ensemble M'Boom. He made numerous musical statements relating to the civil rights movement.

One of the most exciting trio recordings in jazz, Duke Ellington, Charles Mingus and Max Roach's Money Jungle is the sound of three super-sized egos thrashing out their differences in the studio.