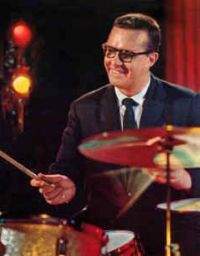 Joseph Albert Morello was an American jazz drummer best known for his work with the Dave Brubeck Quartet. He was particularly noted for playing in the unusual time signatures employed by that group in such pieces as "Take Five" and "Blue Rondo à la Turk". Popular for its work on college campuses during the 1950s, Brubeck's group reached new heights with Morello.