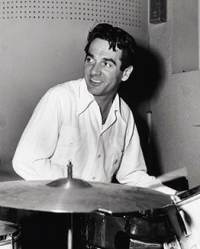 Eugene Bertram Krupa was an American jazz drummer, band leader and composer known for his energetic style and showmanship. His drum solo on "Sing, Sing, Sing" (1937) elevated the role of the drummer from an accompanying line to an important solo voice in the band.

In collaboration with the Slingerland drum and Zildjian cymbal manufacturers, he was a major force in defining the standard band drummer's kit.