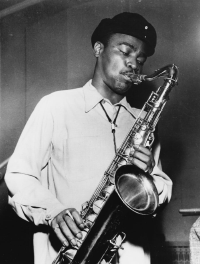 Ike Abrams Quebec was an American jazz tenor saxophonist. He began his career in the big band era of the 1940s, then fell from prominence for a time until launching a comeback in the years before his death.

Critic Alex Henderson wrote, "Though he was never an innovator, Quebec had a big, breathy sound that was distinctive and easily recognizable, and he was quite consistent when it came to down-home blues, sexy ballads, and up-tempo aggression."