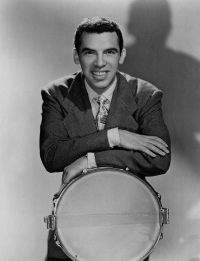 Bernard "Buddy" Rich was an American jazz drummer and bandleader. He is considered one of the most influential drummers of all time.

Rich was born and raised in Brooklyn, New York, United States. He discovered his affinity for jazz music at a young age and began drumming at the age of two. He began playing jazz in 1937, working with acts such as Tommy Dorsey, Count Basie, and Harry James. From 1942 to 1944, Rich served in the U.S. Marines.