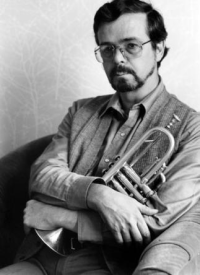 Kenneth Vincent John Wheeler, OC was a Canadian composer and trumpet and flugelhorn player, based in the U.K. from the 1950s onwards.

Most of his performances were rooted in jazz, but he was also active in free improvisation and occasionally contributed to rock music recordings. Wheeler wrote over one hundred compositions and was a skilled arranger for small groups and large ensembles.

Wheeler was the patron of the Royal Academy Junior Jazz course.