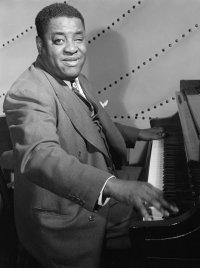 Arthur Tatum Jr. was an American jazz pianist who is widely regarded as one of the greatest in his field. From early in his career, Tatum's technical ability was regarded by fellow musicians as extraordinary. Many pianists attempted to copy him; others questioned their own skills after encountering him, and some even switched instruments in response. In addition to being acclaimed for his virtuoso technique, Tatum extended the vocabulary and boundaries of jazz piano far beyond his initial stride influences, and established new ground in jazz through innovative use of reharmonization, voicing, and bitonality.

Tatum grew up in Toledo, Ohio, where he began playing piano professionally and had his own radio program, rebroadcast nationwide, while still in his teens.