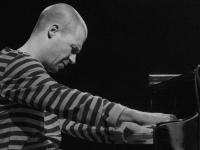 Svensson became one of Europe's most successful jazz musicians at the turn of the 21st century before dying, at the age of 44, in a scuba diving accident.