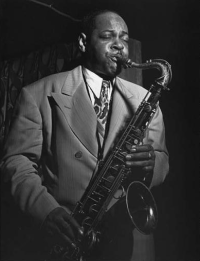 Coleman Randolph Hawkins nicknamed "Hawk" and sometimes "Bean", was an American jazz tenor saxophonist. One of the first prominent jazz musicians on his instrument, as Joachim E. Berendt explained: "there were some tenor players before him, but the instrument was not an acknowledged jazz horn". Hawkins biographer John Chilton described the prevalent styles of tenor saxophone solos prior to Hawkins as "mooing" and "rubbery belches." Hawkins cited as influences Happy Caldwell, Stump Evans, and Prince Robinson, although he was the first to tailor his method of improvisation to the saxophone rather than imitate the techniques of the clarinet. Hawkins' virtuosic, arpeggiated approach to improvisation, with his characteristic rich, emotional, loud, and vibrato-laden tonal style, was the main influence on a generation of tenor players that included Chu Berry, Charlie Barnet, Tex Beneke, Ben Webster, Vido Musso, Herschel Evans, Buddy Tate, and Don Byas, and through them the later tenormen, Arnett Cobb, Illinois Jacquet, Flip Phillips, Ike Quebec, Al Sears, Paul Gonsalves, and Lucky Thompson. While Hawkins became well known with swing music during the big band era, he had a role in the development of bebop in the 1940s.

Fellow saxophonist Lester Young, known as "Pres", commented in a 1959 interview with The Jazz Review: "As far as I'm concerned, I think Coleman Hawkins was the President first, right?