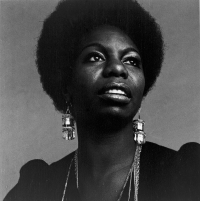 The sixth of eight children born to a poor family in Tryon, North Carolina, Simone initially aspired to be a concert pianist. With the help of a few supporters in her hometown, she enrolled in the Juilliard School of Music in New York City. She then applied for a scholarship to study at the Curtis Institute of Music in Philadelphia, where she was denied admission despite a well-received audition, which she attributed to racial discrimination.