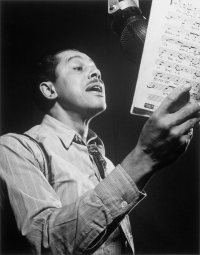 Cabell "Cab" Calloway III was an American jazz singer, dancer, bandleader and actor. He was associated with the Cotton Club in Harlem, New York City, where he was a regular performer and became a popular vocalist of the swing era. His niche of mixing jazz and vaudeville won him acclaim during a career that spanned over 65 years.

Calloway had several hit records in the 1930s and 1940s, becoming known as the "Hi-de-ho" man of jazz for his most famous song, "Minnie the Moocher", originally recorded in 1931. He reached the Billboard charts in five consecutive decades (1930s–1970s).