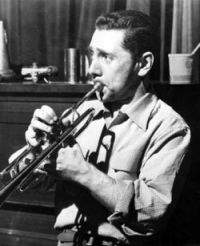 Reuben "Ruby" Braff was an American jazz trumpeter and cornetist. Jack Teagarden was once asked about him on the Garry Moore television show and described Ruby as "the Ivy League Louis Armstrong".

Braff was born in Boston, Massachusetts, United States. He was renowned for working in an idiom ultimately derived from the playing of Louis Armstrong and Bix Beiderbecke.

He began playing in local clubs in the 1940s.