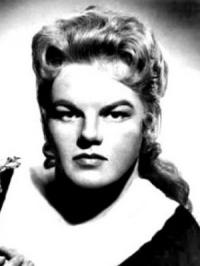 Eileen Farrell was an American soprano who had a nearly 60-year-long career performing both classical and popular music in concerts, theatres, on radio and television, and on disc. NPR noted, "She possessed one of the largest and most radiant operatic voices of the 20th century." While she was active as an opera singer, her concert engagements far outnumbered her theatrical appearances. Her career was mainly based in the United States, although she did perform internationally. The Daily Telegraph stated that she "was one of the finest American sopranos of the 20th century; she had a voice of magnificent proportions which she used with both acumen and artistry in a wide variety of roles." And described as having a voice "like some unparalleled phenomenon of nature. She is to singers what Niagara is to waterfalls."

Farrell began her career in 1940 as a member of the CBS Chorus on CBS Radio.